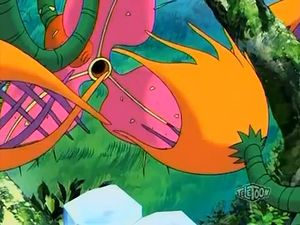 Blooming Buttercups are a giant species of carnivorous plants that grow in the Neathian jungles.

Several are seen trying to eat Dan, Shun, and Fabia in the jungle. Dan was nearly finished by a Blooming Buttercup but he worked himself out just in time.[1]

Later, a Blooming Buttercup tried to attack Marucho from behind, but Ren saved him by pulling him into the bushes.[2]