The Lake is a beautiful place located in New Vestroia that is featured in Bakugan: Rise of the Resistance. This place hides a Hurranian operation base were the Hurranian soldiers reunite. 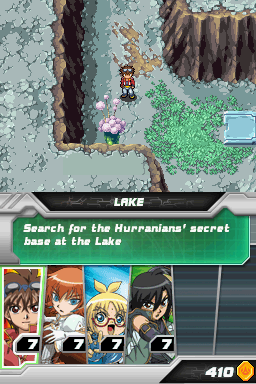 Bakugan: Rise of the Resistance[edit]

When Eva placed a tracking device on Typhoon's back, they use their signal to locate their hidden base of operations, they discovered that their base was somewhere hidden on the Lake.

When they arrived to the Lake, the Brawlers were pursuing Asteria to their base, Asteria tried to block them, but they still managed to catch her, Asteria then challenged them to a battle, but she loose and scaped to their base, the Brawlers followed her and they encountered with Dr. Xeron, the Hurranian top scientist and Eva's ex-boss, who wanted to punish Eva for her betrayal challenging them to a battle, when he lost, the Brawlers followed him to their hidden Hurranian base, when they encountered an Hurranian Guard that was guarding the secret base, the guard brawled against them, but he was unevitablely defeated, and when he scaped, they were obstaculized by the water, and the only way to go through it was with an Aquos DNA fragment for Elfin, and Eva knew exactly were to find it.

When they returned, Marucho, with the help of Elfin, had the ability to walk on the water, and they could finally found the secret base on the Lake, and when they finally found it, they discovered that the Hurranian empire was planning to use six armies of Replicated Bakugan to invade Vestal, something to wich Mira didn't agreed at all, and they tried to stop them, but Asteria got in the way and battled them, so they had no choice than defeat her, and after her lost, Mira pushed Ateria towards the portal, and aked Marucho if he could redirect the portal towards Vestal, to wich he did.

When she returned, she brought back Baron and Nemus, Resistance's old members to join them in the battle, but just after Baron's arrival, Typhoon interrupted them, and challenged the new Brawler to a battle, and when he was defeated, he used his fake Taylean to destroy the base's dimensional transporter for them not to follow Dr. Xeron, and the Barwlers had no choice than track Xeron's signal from Eva's ship.

After Ceros and his Vertexx were defeated, the Brawlers returned to the Lake, in hopes of finding the location of the Hurranian Mothership through Typhoon's tracking device on his back, they faced him and his powerful Taylean to a last battle, after he was defeated, the Emperor Hurranos dragged him to the Mothership to punish him, but his signal wasn't strong enough to follow him, but they could put a tracking device on Asteria, who appeared just after, she fought with Krakenoid, her strongest Bakugan, but she lose, Hurranos dragged her to, saying that all of his soldiers were useless, and Eva finally got the signal she needed to find the Hurranian Mothership, and could finally get there to put an end to Hurranos' tyranny.