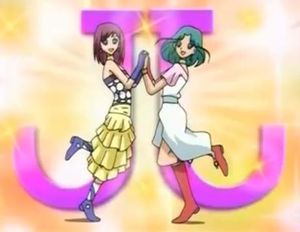 The JJ Dolls (JJリップス, JJ Lips?) are a pair of singers comprised of Jenny and Jewls.

They both enjoy playing Bakugan, but their manager wants them to focus on their career. They both brawl against Dan and Marucho, under Masquerade's orders, and later against Tayghen, alongside Marucho. Jenny uses Aquos Bakugan and Jewls uses Subterra.

In Bakugan Battle Brawlers: New Vestroia, they can be seen on a large TV screen in the background in Invasion of the Vestals and Virtual Insanity.

In episode 22 of Bakugan: Gundalian Invaders, they were seen on a building, when Stoica was walking around on Earth to find more humans for the Gundalian Army.