Haavik (ハーヴィック, Hāvuikku?) is a shapeshifting alien that appears in Bakugan: Armored Alliance and the main antagonist of that season. He is an alien that causes chaos and destruction between planets that, after escaping from a space police force, arrives on the planet Earth when he realizes that the Bakugan from the Planet of Vestroia now live there with humans. He then he decided to make the greatest spectacle of mayhem and destruction ever using the Bakugan as his main tool to destroy that planet.

He owned a Fangzor x Mantonoid as his first main Fusion Bakugan. Later, he creates a Fusion Bakugan made of five unknown Bakugan of different Faction (Except Aurelus) named Sabrus who would act as his Guardian Bakugan. 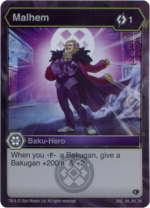