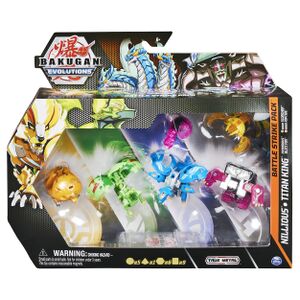 The Battle Strike Pack is a Bakugan product that was released during Bakugan: Evolutions. It consists of one Platinum Bakugan, two Core Bakugan, one Geogan, two Nanogan, and their accompanying cards.

Introducing all-new Bakugan Evolutions Battle Strike Pack! The Battle Strike Pack is the ultimate collector item – featuring a Platinum Bakugan forged in true metal, 2 Bakugan, 1 Geogan, 2 Nanogan, 6 BakuCores, 3 Character Cards, 3 Ability Cards, and 3 Gate Cards. It has everything you need to collect, brawl and more! Your Bakugan just became stronger than ever with these battle-hardened Platinum Bakugan – there's one in every pack, made with true metal! Feel the premium weight in your hands as you roll them over the BakuCores! Watch your Bakugan pop-open and transform into a fierce creature! These heavy-weight champions will deliver incredible damage in battle like never before. Roll into action against friends with Bakugan and emerge victorious! For a surprise attack, summon your Nanogan to power up your Bakugan and conquer your opponent! The Nanogan can attach to any Bakugan for a powerful boost in battle. Nanogan features translucent details and awesome designs! Mix and match to create your favourite combination and deliver incredible damage in battle. Use the included Ability cards for even more ways to play and earn bonuses! Add all the Season 4 Bakugan Evolutions toys to your collection and build your own dream team! Take your brawls to the next level with an all-new Bakugan Evolutions Battle Strike Pack!

This article is a stub. You can help The Bakugan Wiki by expanding it.
Retrieved from "https://bakugan.wiki/index.php?title=Battle_Strike_Pack&oldid=824594"
Categories: