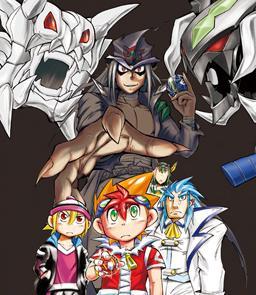 Savac is in the top right corner.

In the sixteenth episode, Zakuro uses Savac to strike fear and enter the hearts of both Harubaru and Raichi. Later on, Savac is seen standing in the right direction after Koh Grif's Kilan Leoness was overpowered and knocked out of the Gate Card. Zakuro also used Savac during his brawl against Harubaru to curse the latter's Rise Dragaon.

Savac is the small die cast projectile piece that came with BTC-13 Dio Sivac. It's commonly seen in silver although a Gold and Copper Version was released as Limited Editions to an event or campaign.