Trapped in Interspace: A Bakugan Adventure

Trapped in Interspace: A Bakugan Adventure is a brief five-part story that was distributed as part of the 2010 Bakugan Battle League. Each week of the League provided a new installment in the story, with the participants able to choose from two choices as to how the story progresses in the next week. 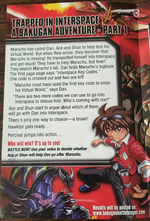 Marucho has called Dan, Ace and Shun to help test his Virtual World. But when they arrive, they discover that Marucho is missing! He transported himself into Interspace and got stuck! They have to help Marucho, but how? They search Marucho's lab. Dan finds Marucho's logbook. The first page says "Interspace Key Codes." One code is crossed out and two are left.

"Marucho must have used the first key code to enter his Virtual World," says Dan.

"There are two more codes we can use to go into Interspace to rescue him. Who's coming with me?"

Ace and Shun start to argue about which of them will go with Dan into Interspace. There's only one way to choose - a brawl! Hawktor gets ready... Percival jumps into action...

BATTLE NOW! Use your votes to decide whether Ace or Shun will help Dan go after Marucho. 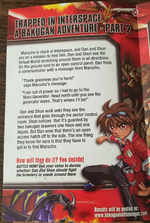 Marucho is stuck in Interspace, and Dan and Shun are on a mission to free him. Dan and Shun see the Virtual World stretching around them in all directions. On the ground next to an open control panel, Dan finds a communicator with a message from Marucho.

"I ran out of power so I had to go to the Main Generator. Head north until you see the generator dome. That's where I'll be!"

Dan and Shun walk until they see the entrance that goes through the sector control room. Shun notices that it's guarded by two Bakugan brawlers, one Haos and one Aquos. But Dan sees that there's an open access hatch off to the side The only thing they know for use is that they have to get in to find Marucho.

What will they do? You decide! BATTLE NOW! Use your votes to decide whether Dan and Shun should fight the brawlers or sneak around them. 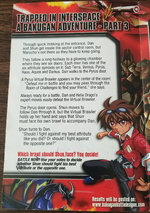 Through quick thinking at the entrance, Dan and Shun get inside the sector control room, but Marucho's not there so they have to keep going.

They follow a long hallway to a glowing chamber where they see six doors. Each door has one of the six attribute symbols on it: Sub Terra, Ventus, Pyrus, Haos, Aquos, and Darkus. Dan walks to the Pyrus door.

A Pyrus Virtual Brawler appears in the center of the room! "Defeat me in battle and you may pass through the Room of Challenges to find your friend," she says.

The Pyrus door opens. Shun moves to follow Dan through it, but the Virtual Brawler holds up her hand and says that Shun must face his own brawl to accompany Dan.

Which brawl should Shun face? You decide!

BATTLE NOW! Use your votes to decide whether Shun should fight his best attribute or the opposite one. 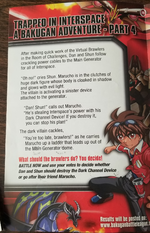 After making quick work of the Virtual Brawlers in the Room of Challenges, Dan and Shun follow crackling power cables to the Main Generator for all of Interspace.

"Oh no!" cries Shun. Marucho is in the clutches of a huge dark figure whose body is cloaked in shadow and glows with evil light.

The villain is activating a sinister device attached to the generator.

"Dan! Shun!" calls out Marucho. "He's stealing Interspace's power with his Dark Channel Device! If you destroy it, you can stop his plans!"

The dark villain cackles, "You're too late, brawlers!" as he carries Marucho up a ladder that leads out of the Main Generator dome.

What should the brawlers do? You decide!

BATTLE NOW and use your votes to decide whether Dan and Shun should destroy the Dark Channel Device or go after their friend Marucho. 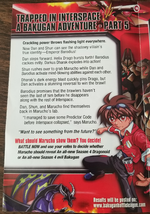 Shun rushes over to grab Marucho while Dan and Barodius activate mind-blowing abilities against each other.

Barodius promises that the brawlers haven't seen the last of him before he disappears along with the rest of Interspace.

Dan, Shun, and Marucho find themselves back in Marucho's lab.

"I managed to save some Predictor Code before Interspace collapsed," say Marucho.

"Want to see something from the future?"

What should Marucho show them? You decide!