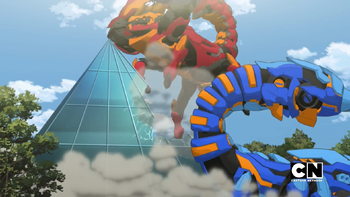 Costero Canyada being destroyed by a Pyrus and Aquos Skorporos

Costero Canyada is a location in Bakugan Battle Planet, located in Los Volmos.

Marco Chezanello later uses his Pyrus Cyndeous to take over the park from the Rowdy Reds, decorating the park with monuments to himself.[2]