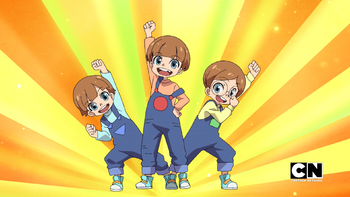 The Rowdy Reds posing. From left to right: Maggie, Mac, and Max.

The Rowdy Reds are a group of children who formed a brawling team after seeing the Awesome Ones' videos online. The Rowdy Reds consist of Mac, Max, and Maggie, and their respective Pyrus, Ventus, and Aquos Skorporos.

The Rowdy Reds is made up of three young children, each around the age of seven. The members wear overalls with colored shapes that correlate to their respective Faction. They modeled their team around their heroes, the Awesome Ones.[1]

The Rowdy Reds first appear in Monkey See, Monkey Don't, when Dan Kouzo and Drago encounter the team playing in the park with their Bakugan, destroying the area in the process. Dan reprimands the children, and they appear to agree with Dan. Later, while Dan and the rest of the Awesome Ones, Lia and Wynton, are eating at the local Burger Joint, a news bulletin appears revealing that the the Rowdy Reds have continued with their destruction in Costero Canyada. Dan and the Awesome Ones go to stop them, which leads to a brawl between Dan and Rowdy Reds. The fight is concluded after the Awesome Ones convince the Rowdy Reds that continuing the brawl would lead to more destruction, and the two groups work together to rebuild the destroyed areas.[2]

The Rowdy Reds are split when Marco Chezanello takes over their park with his Pyrus Cyndeous. Mac and Maggie are left distraught, but Max is in awe of Marco's perceived power, and joins him as a personal servant. When the other two members return to the park with the Awesome Ones, Max is guarding the gate with a water gun. During the ensuing brawl, Marco orders Cyndeous to attack Mac and the rest of the brawlers. Cyndeous, having enough of Marco's cruel tactics, flies into a fit of rage, and begins attacking randomly, causing a fireball to begin falling on the group. Since being flung outside the Drago, Dan and Drago return, and Drago protects the brawlers from the attacks. After the ensuing brawl, Mac and Maggie accept Max's apologies for siding with Marco.[3]