Pinpoint Park is a location in Bakugan Battle Planet. It is the site of at least one of the craters from the Great Collision. 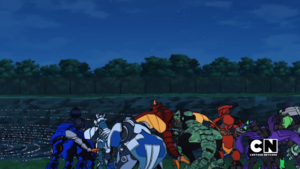 The awoken Bakugan watching the closed Bakugan spiral into the crater

Pinpoint Park is the only know crater from the Great Collision. The Awesome Ones sneak into the restricted section of Pinpoint Park on the twelfth anniversary, to film a video about the crater. However, they find themselves caught in the middle of a world changing event that that causes them to discover the Hide Matrix and Bakugan. The Awesome Ones meet their original partners in the crater, Drago, Trox, Gorthion, and Howlkor Ultra.[1]

The crater is again the site of a world changing event when, in the middle of the night, all the Bakugan in Los Volmos fall into a dream-like trance and begin rolling towards the crater. Some Bakugan manage to wake up, such as the Bakugan of the Awesome Ones, where they observe the double helix created by the closed Bakugan, and are greeted with a vision of Tiko.[2]