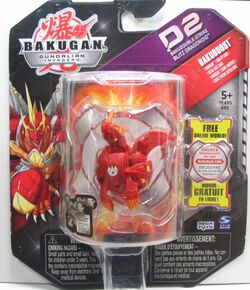 When a button is pressed on a BakuDouble Strike Bakugan, they will undergo a second transformation, such as extending or opening a part of the Bakugan, or launching a small projectile. For example, when Snapzoid first opens, only its head and side pieces open. Then, after pressing the button on the back of its head, the thinner second head that resides inside of Snapzoid's neck comes out. A hidden G-Power will sometimes be revealed upon pressing the button. The exceptions to this feature are Dartaak and Sky & Gaia Dragonoid, where both of these Bakugan open automatically instead of requiring a manual input.

BakuDouble Strike only get their extra G-Power bonus, or "Double Strike Bonus", when they brawl on an opponent's Gate Card and the owning player chooses to activate its second transformation. [1]

Dartaak follows this rule, now matter where the projectile lands. [2] However, Sky & Gaia Dragonoid act as two different Bakugan, where they counted as two seperate Bakugan if each piece lands on a separate Bakugan. [3]