The Gundalians (Japanese version: Gandaldians (ガンダルディア人, Gandarudia-jin?)) are a race of humanoid aliens from planet Gundalia. They were lead by Emperor Barodius and were at war with the Neathians. Eventually, they began coming to Earth through Bakugan Interspace in order to conquer and if necessary destroy both worlds. 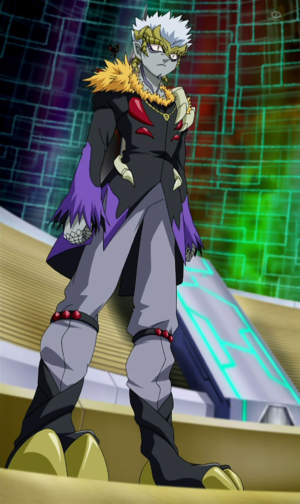 Ren in his Gundalian appearance

For the most part, Gundalians, regardless of gender have gray skin and grayish-blue marks under their eyes. A bone/horn-like plate covers the forehead and can grow all the way around the head, though it does not on most shown Gundalians. Along their necks are also grayish-blue marks, but it is unknown if they continue on to the chest. They have the ability to disguise themselves as human-like beings, albeit with some imperfections such as pointed ears and reptilian eyes, but well enough to be indistinguishable from a normal human. They share this ability with the Neathians. Whether this is an innate ability of both species or is done through some form of technology has remained unexplained. The Gundalian Zenet has demonstrated superior use of this ability and can also imitate the appearances of others.

They can generate Battle Gear from their bare hands, as shown in episode 15. This is possibly connected to their innate electrical abilities. They are also shown to teleport wherever they like at will, as shown in episode 2. This is likely a form of transportation technology. Some Gundalians are also able to generate electricity from their hands with enough power to incapacitate a human being. Their dry, scaly hands would facilitate their ability to do this without electrocuting themselves. This electrical control could allow them to control their technology with what seems to be mere thought: they are instead running their electricity through it. This ability is demonstrated by Kazarina in episode 17, Barodius in episode 19 and Gill in episode 20. So far, the members of the Twelve Orders have demonstrated the most potent forms of this ability. The Twelve Orders are the ruling castes of the Gundalians, lead by Emperor Barodius.

As a whole, the Gundalians seem to be a war-mongering species. It is seen that there appears to be a vast majority of Gundalians in the army, and the leaders in their society seem to be willing to do whatever it takes to make themselves stronger than anyone else, either physically, mentally, or in social standing. Also, many of the Gundalians of nobility seem to want to conquer as much territory as possible, specifically members of the former Emperor's regime.

Gundalians seem to have obtained their positions thanks to some of their innate abilities, such as Stoica's ability to breathe underwater or Kazarina's hypnosis. The status of the nobility is shaky at best as all of the noble houses have their own agendas and vie for the Emperor's favor. Backstabbing is frequent and with the advent of their latest emperor, the Twelve Orders has started to show signs of hemorrhaging. They can contact other Gundalians by covering their ears over their hands, as shown at episode 37.

It appears that after the war, Neathia and Gundalia have become close friends and sorted out their differences. This is shown with Paige and Rafe, who seem to be very good friends and they also seem to be working well together. Gundalia has also become a better place for its inhabitants as well as its surrounding neighbors. Under Barodius, Gundalia was a tyrannical, totalitarian, fascist, police state. He was an absolute imperial monarch, underneath which, an oligarchy of nobility reigned. It seems that Nurzak, having seen the decadent peak that Barodius had brought the monarchy to, decided to reform the government into a parliamentary style democracy with himself serving as the first Prime Minister.