The Bakugan Reboot Series, or Reboot, (Unofficial name), refers to an era of the franchise that started in 2018, with the tease of Bakugan Battle Planet website. The Reboot features some characters and Bakugan from the Legacy series, but only in name; no direct references to previously existing characters has been made. 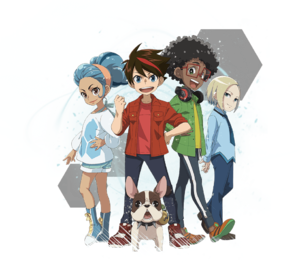 The Awesome Brawlers - the main protagonists of the Reboot series

Note: The majority of these characters and Bakugan are returning in name only, and bear no connection to their Legacy counterparts.

This article is a stub. You can help The Bakugan Wiki by expanding it.
Retrieved from "https://bakugan.wiki/index.php?title=Reboot&oldid=820170"
Category: