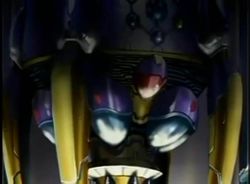 The Bakugan Termination System (also known as BT System) was a mechanical device that was able to terminate all Bakugan within a 6,000 km range. The system needed the attribute energies of the Six Ancient Warriors to power it up. The Haos energy that Hydron collected gave the BT System the power to force all Bakugan in New Vestroia into ball form. What the system can do with the other energies is unknown.

When Zenoheld decides to test the BT system, Shun heads to New Vestroia with his newly evolved Master Ingram, while the others head to Vestal. Once Shun arrives he finds that all the Bakugan are missing and Ingram is still in ball form. Skyress arrives and tells him that a metal sphere came from the sky and sent energy waves that trapped all the Bakugan in ball form. Shun attempts to destroy the device but finds that it is protected by a force field and get shocked. Lync then shows up, and explains the BT System's power and how it is releasing Dimension Waves that cause the Bakugan to be trapped in Ball Form.

The main reason why Vexos wants to destroy the Bakugan is still unknown, so far it is assumed that they wanted to take revenge on the Bakugan. With the Bakugan gone, they would be able to conquer New Vestroia and with the Bakugan gone, no power would be able to match their Mechanical Bakugan. In BT: The Final Battle, the Vexos and Zenoheld obtained all six energies.The BT System is fully ready but needed to charge a little bit more due to Farbros' power during their battle. In Exodus, Drago and Helios attempted to destroy it with their power but were unsuccessful, Drago then lifted the BT out of the ground and flew it into orbit so it couldn't kill the Bakugan on New Vestroia, the system started to activate while still in range but at that moment Drago motivated by Wavern's spirit, absorbed the Six Attribute Energies into himself, evolving into Helix Dragonoid and successfully destroying the system milliseconds before it could launch and foiled up Zenoheld's plan.