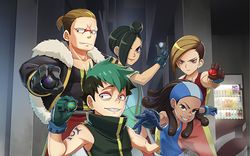 The Exit Team was an antagonist group that debuted in the Bakugan Battle Planet anime.

They worked for AAAnimus Inc. in order to defeat the Awesome Brawlers and get their Bakugan. Later, the original members of the group, except for Aay, were replaced by new ones.[1] Soon after, the original group was fired, while the new members defected of it.[2]

They return in Geogan Rising when it's revelated that the group has been making videos and performing good deeds to fix their past actions.[3]

This group uses codenames related to operatives rank, with Aay being the leader, and E being the lowest ranked member. Each original member used a Mantonoid of different Faction.

At one point, the group's membership, aside from Aay, was replaced with China Riot, Kurin, Strata the Hunter, and Magnus Black, who became the group's new leader.[4] Dee was also shown as a newscaster, where they were volunteering for various acts that helped the city of Los Volmos, such as rescuing citizens and other good deeds. They also said to stop the eruption of a volcano when in actuality they were the ones who caused it to erupt, as a sort of exercise, as stated by Aay. The new Exit Team faced off against The Awesome Ones, but in the end, Dan defeated Magnus, the last member standing.[1]

Philomena Dusk revealed that all members of the Exit were fired after their defeat.[5] This was also confirmed by Col. Armstrong Tripp.[6]

"A corporate-sponsored group of hired Kid Battlers (14-16), the EXIT are both well-equipped and more ruthless than our heroes. They might seem cool at first glance— with AAANIMUS funding helping their hip and well-produced internet vids garner a certain level of 'pop' fame— but they are actually cold-blooded. Created as a foil to the natural groundswell the Awesome Ones have created, the EXIT— lead by AAANIMUS's marketing team— look to twist their notoriety into a corporate-friendly image that serves Philomena's goal of world domination. With the appearance of a twisted pop band, the members of the Exit are ranked A through E... Which also happen to be their names. Aay is the leader of the Exit. Bee is second in command, followed by Cee, Dee, and E. They are mercenary and all about the money. The Exit are the top kid battlers in AAAnimus with the exception of..."