Magnus Black is a an anti-hero that appears in Bakugan Battle Planet and is the rival to The Awesome Brawlers and Dan Kouzo. His Partner Bakugan is Darkus Nillious and he also owns a Darkus Fangzor, Darkus Webam and Darkus Eenoch. In Bakugan: Geogan Rising he uses the Darkus Geogan Hyenix as his current main Geogan.

A masked boy wielding the powerful Nillious who becomes Dan's number one rival. Magnus has no interest in fame and keeps his identity a mystery. Despite working for AAAnimus, Magnus is a strong believer in the bushido code of the samurai— though he has clearly lost his way.

Armed with a cadre of powerful Bakugan, Magnus is the best Battler out there... Except for Dan Kouzo. Magnus takes an instant dislike to Dan because it's obvious that this boy is special and his bond with his Bakugan is noble. Magnus turns his jealousy into drive, dedicating himself to becoming the best battler possible in order to take down Dan Kouzo, and save his sister once and for all.[1] 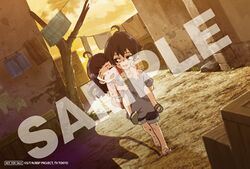 Magnus carrying his sister through the streets

Magnus and his sister Emily grew up in poverty. The two were exceptionally close, and Magnus took care of her until she fell sick with a mysterious illness. After that, Magnus took up an offer to work for AAAnimus Inc. in exchange for providing her with medical care.

Magnus' first interaction with the Awesome Ones is him attempting to infiltrate the group. After Aay and his Mantonoid appear to terrorize a local mall, Magnus (and later Shun Kazami) show up to stop him. The Awesome Ones watch their display, and eventually offer a competition to choose whether Shun or Magnus should join the AO. Shun wins due to Magnus' reckless behavior, foiling Magnus' plot.[2]

In the episode Magnus is Back!, Magnus enrolls at the Bakugan Academy as a teacher so that he can teach a new type of elemental evolution to the students. He later leaves the Academy in the episode Dan vs. Mr. Magnus after he helped Dan achieve Speed Mode, in which he told him that this school is hiding some sort of secret. In the episode A New Power Nano-Gear, it is revealed that he enrolled at the Bakugan Academy as a teacher in order to go undercover and investigate the Academy from the inside in an attempt to search for evidence involving a mysterious person teaching outside Brawlers how to elementally evolve their Bakugan.